Learning about predators in the egg

Source: vroegevogels.vara.nl
Even before they have hatched from the egg, frogs can learn which predators will hunt on them. Earlier it was discovered that amphibians and fish can make this distinction in the larval stage, but now this has also been observed in the embryonic stage. 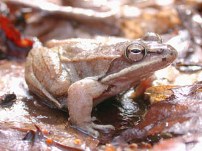 Once the tadpoles hatched from their eggs, their reaction to water with salamander traces was measured. The tadpoles that had been very active before now laid still for minutes. This reaction was the most intensive at time points when many injured tadpoles had been detected.

The results of this study were published in the scientific journal Behavioral Ecology and Sociobiology.