Source: nrc.nl
The development of a species does not have to take centuries. A famous biologist couple has been researching finches at the Galapagos Islands for over 30 years. Charles Darwin noted that finches are different on every island. 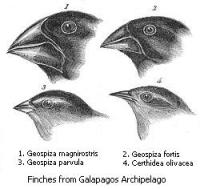 This observation forms the classical support for the evolution theory.
In 1981 a large finch with a beak that was too large flew to a neighbouring island. Six generations later this outcast had become the ancestor of a new species. The Grant couple described the story of this finch in Proceedings of the National Academy of Sciences.
The finch was noticed in 1981 as being different from the other finches on the island. It appeared to originate from a neighbouring island and it was a hybrid, part ground finch and part cactus finch. It mated with a hybrid female and their offspring was followed for 28 years. Now, in the sixth generation, the offspring only mate with each other. A new species has been born.
The Grants say that two factors have been determining in this. First of all, the immigrant bird tried to sing like the local finches, but did not succeed in this. Consequently, he, and his offspring, was less attractive to the local female finches. Subsequently, 2004 was a very dry year. The drought set back the larger newcomers. The deviant family almost became extinct, except for one brother and sister. These two mated and their offspring showed even less resemblance to the local finches. Since then the family has only mated among each other. The family is small, about 20 to 30 birds.
Grant and Grant conclude that the development of a species never has a single cause.