Source: harpij.nl
This March the Antwerp Zoo had a first. Spectacled bear Inca was artificially inseminated with sperm from her partner Gladstone. Despite repetitive efforts, natural insemination had not succeeded. 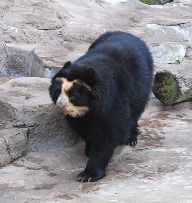 The Antwerp Zoo is active in the spectacled bear breeding programme to build up a reserve population in European zoos.
Twenty-four European zoos currently have a total of 67 spectacled bears. The Centre for Research and Conservation (CRC) in the Antwerp Zoo has been performing DNA analyses on manure samples from spectacled bears in Peru and Bolivia for five years. This provides insight into the genetic status of the spectacled bear in the Andes, its natural habitat. The survival of spectacled bears is endangered by hunting, illegal trade and the loss of habitat.
Inca (23 years old) and Gladstone (20 years old) are a genetically important couple for this vulnerable species. In the past Irma gave birth to seven cubs in four nests. Gladstone has been living in Antwerp for the past five years. Despite regular mating Inca did not get pregnant. That’s why it was decided to perform AI. A team of researchers from the IZW in Berlin assisted the caretakers in Antwerp. Further examination revealed that Gladstone had only one testicle, which luckily did produce good semen. If the insemination has been successful, a nest of spectacled bears is to be expected between November 2010 and April 2011. This period is rather long because there is a delayed nesting of the fertilized egg in spectacled bears. The mother can delay the development of the embryo so that the baby is born when the circumstances are right (weather, fruit season).