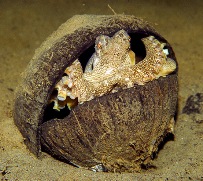 A team of Australian biologists investigated a group of 20 veined octopuses (Amphioctopus marginatus) on a regular basis. The researchers discovered that the octopuses regularly dug up two coconut-shell halves and used them as a hiding place. This occurred in places with few natural hiding places. But even more exceptional was that the octopuses took the coconut halves with them by clamping them under their bodies with their tentacles (approximately 15 cm long). With the other tentacles the octopuses walked like on stilts. The researchers were very amazed at this. By taking the coconuts with them the octopuses were much slower than without them. But the animals did have an instant hiding place at hand, and at the flat sea bottom this might just be an excellent survival strategy.
The researchers say that this is an example of tool use. According to their definition a tool is only useful in certain circumstances. This is in contrast with, for instance, the shell of a hermit crab, which is always functional. Taking a coconut with you is only useful in certain circumstances and is therefore considered tool use.
Tool use used to be considered an exclusively human characteristic, but now several examples in other animals are known. In Cephalopoda, the family that octopuses belong to, the use of tools was not observed before, although octopuses are considered very intelligent animals. Octopuses can find their way in a maze, they are good escape artists and they seem to remember past events.
The results of this research were published in Current Biology.