Source: teleac.nl
Frogs have long been known for their sensitivity to environmental pollution. However, a biologist of South Dakota University discovered that frogs are not necessarily more sensitive to chemicals than other animals. 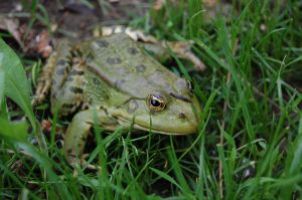 When a frog species disappears or becomes extinct somewhere this is often considered an indicator of the condition of the environment. But this view is incorrect according to biologist Kerby. Frogs are only ‘slightly susceptible’ to ‘insusceptible’ to most chemicals. Other animals can be equally susceptible or more susceptible to chemicals. It all depends on the chemical in question.
Kerby looked at 28.000 different toxicity studies that had been performed in the past. The toxicity of 107 different chemicals was investigated, including inorganic chemicals, pesticides and heavy metals. The chemicals were tested on 1279 different animal species, such as worms, fish, snails and insects.
Kerby says that environmental researchers should be more careful with considering frog mortality as evidence for environmental pollution. If they nevertheless want to use frogs or other amphibians, they should first investigate what exactly the animals are susceptible to.

The research was published in the scientific journal Ecology Letters.