Source text and photo: nrc.nl
Three different light-coloured species of lizard live in the sand dunes of New Mexico. In each species the light colour is due to another genetic adaptation. The light colour was created three times in evolution. With this finding researchers showed that an adaptation to the environment does not always have to occur via the same mechanism. This was published in Proceedings of the National Academy of Sciences. 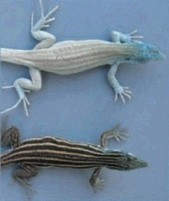 The sand dunes in New Mexico were created six thousand years ago and since then light-coloured animals have developed there. This colour protects them better against predators. Russian, American and German researchers studied the pigmentation of three lizard species: the Eastern fence lizard (Sceloporus undulatus), the Little striped whiptail (Aspidoscelis inornata) and the Lesser earless lizard (Holbrookia maculata).

The researchers found that the gene that is responsible for the animals’ skin colour contained three different mutations in the three species. Two of the mutations caused the gene to stop making effective protein. The third mutation was different: The function of the gene was not altered but it appeared to be hampered by other genes that regulate the transcription of the gene.
The biologists were not very surprised that the loss of function was based on different mechanisms. After all, there are several ways to break something.