Source: news.bbc.co.uk
Elephants can't see very well, but their hearing is exquisite. The same goes for their scent. Using a variety of tests, researchers from several different institutes are trying to find out how intelligent elephants are. 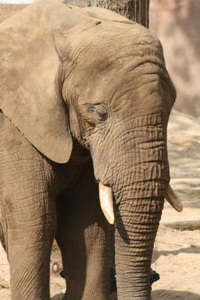 Time and again the researchers discover that we still know very little about elephants, but that they have capacities that had up till now only been seen in humans and primates. Tests were performed on elephants from the Amboseli National Park in Kenya.
Using a contact sound (here am I, where are you?), a deep ruffle that can be heard over a large distance, it was tested how many contact sounds the elephants are able to distinguish. Matriarchs, the female leaders of the herd, can distinguish at least a hundred different sounds, meaning that she can distinguish more than a hundred different elephants. The researchers compared this with a test in which a human participant had to distinguish a hundred different persons, placed behind a fence, on the basis of their voices.
Elephants in a Japanese zoo were tested on their numerical skills. Different numbers of objects were placed in buckets and the elephants had to indicate if there was a difference. Similar tests have been performed with children and various primates. Most people find it easier to distinguish one and two than five and six. But this was not the case for the elephants: They could distinguish five and six just as easily as one and two.

The elephants in Amboseli also seem to hear the difference between human languages. Several different languages are spoken in the region. The Maasai, a nomadic people, speak Maa. Then there are the Kamba, farmers, who speak their own language. And there are often English speaking tourists in the park. The elephants have the most to fear from the Maasai. The elephants sometimes kill their livestock and then the Maasai retaliate. They have the least to fear from tourists, who mainly want to make pictures. When a researcher’s assistant spoke Maa to the elephants, they became anxious. But when he spoke Swahili, peace returned and the animals continued eating. The language skill of the elephants has not yet been investigated further, but the researchers say it is definitely interesting.