Source: vroegevogels.vara.nl
Orangutans use pantomime to make something clear. After years of research with orangutans in Borneo eighteen examples of pantomime were identified. These pantomimes were mostly directed at humans, but they were also used between orangutans. 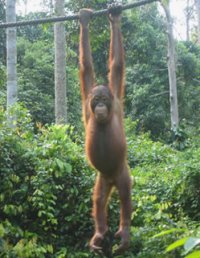 It has been known for some time that orangutans used gestures. When they get angry, for example, they throw things. This was considered impulsive behaviour and not behaviour to achieve some goal. But the research on Borneo showed goal-oriented acts. One example was an ape unable to crack a coconut that pantomimed how it could be opened with a machete. Another example was an ape that was scratching himself with a stick, hoping that another ape would come to his aid. It seems that pantomime is mostly used when other forms of communication have failed.
According to the researchers the results of this study show that not only humans use pantomime to communicate. This research was published in the scientific journal Biology Letters.