Source: scientias.nl, photo Carey James Balboa
Tree frogs in rain forests communicate with each other by making the branches of the plants they live on vibrate. The hind legs of the frogs shake the branches up and down 8 to 12 times per second. 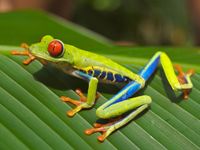 These vibrations are mainly used to warn others to stay out of their territory. They can also be used to find and seduce a partner. The researchers think that the vibrations are also used to warn against predators.
The vibrations are felt because they travel to the body of the receiving frog and land in the bones of the inner ear. These bones also receive sounds.
The vibrations differ according to the message. The receiver is able to determine how big the sender is and what their motivation and status is.
It has been known that frogs sometimes vibrate when they are in danger. It was thought that the frog does this to look bigger, but now it seems that this is not the case.
Vibrations may be a remarkably effective means of communication. The frogs do not have to see each other and the vibrations can travel. The frogs are able to sense the vibrations from up to two metres.

Communication via vibrations has up till now only been seen in insects. It seems that this effective means of communication has been overlooked for years by the researchers.