Source: scientias.nl, photo Gaz via Wikipedia
Bowerbirds are known for the remarkable constructions they build – bowers – and for their courting behaviour. Research has now shown that the males build their bowers in such a way that they themselves look bigger - and therefore more interesting - for the females. 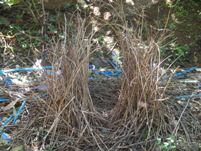 Big bowerbirds build a kind of tunnel with a floor of sticks and walls of vertical sticks. The tunnel ends in an open territory where the females gather. The tunnel serves as a stage for the male. Here he can show himself to the females. The male places all kinds of object between the stage and the place where the females stand, such as small stones, shells, flowers and whatever he can find. The objects are not places randomly however. The absolute size of the objects increases as the distance between the females and the podium grows. An optical illusion is creates: The stage seems smaller and the male looks bigger.
The researchers turned the order of the objects around. The largest objects were placed near the females and the smallest near the stage. This way they could investigate how important the optical illusion is for the male. Within three days the males had put the objects back in their original order.
According to the researchers the bowerbird is the first non-human animal species that uses optical illusion to mislead others. This shows that bowerbirds not only use structure and colour (some kinds of bowerbird only place blue objects in their bower) but also use the geometry of the arrangement.

Back to the bowerbirds. After the females have gathered, the show can start. The male shows himself to the females and waves around a bit with a colourful object. This is followed by a strut across the stage and then the females that are up for it can mate with him. The females build a nest themselves (not at the bower) and take care of the breeding.