Source: harpij.nl and zoovienna.at
Late August a panda cub was born in Tiergarten Schoenbrunn in Vienna (Austria). Pandas rarely get pregnant in captivity. The baby was conceived naturally. This only occurred once before in Europe. 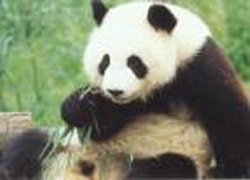 This first occurrence was with the same panda couple. In 2007 they produced the panda cub Fu Long, a brother of the newborn baby. Fu Long was transferred to China at the end of 2009. There he lives in a panda sanctuary.
Female pandas are only able to conceive two to three days a year. Despite the bad weather during these days, the female Yang Yang and the male Long Hui mated several times. After a five-month gestation period, the panda baby was born. At birth, pandas are 10 to 13 centimetres tall and they weigh about one hundred grams. Yang Yang and her baby are staying in a maternity enclosure. The mother feeds her baby every two hours. Yang Yang can leave the maternity enclosure to eat and drink. Zoo visitors can follow what happens in the enclosure. There are cameras and short films are made regularly that can be seen on television screens.
To ensure the food supply for the giant pandas, bamboo has been planted in several places. Most of the bamboo is purchased elsewhere, but the plants can be used when deliveries are delayed. The suckling mother now also receives some freshly chopped bamboo on a regular basis.
The young panda is growing fast. The video images clearly show that the young is bigger than when it was just born. You can also now see the familiar black-and-white coloration.