source: burgerszoo.eu
An important milestone was reached in Burgers' Zoo (The Netherlands): The 1500th coral colony was established. In collaboration with several renowned aquaria, Burgers' Zoo plays a leading role in the cultivation of corals. 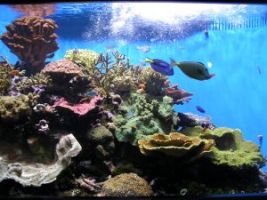 Corals are protected animals. Much time and effort is put into the cultivation of coral to be able to show the zoo visitor a real live Indo-Pacific coral reef. Cultivation makes it unnecessary to take coral from the wild. The results show that this is quite successful. The largest colonies have reached a diameter of 1.3 meter. Besides the cultivation of corals, Burgers’ Zoo also performs a lot of research, in collaboration with universities and other public aquaria. This knowledge can be used to repair damaged coral reefs in the wild. The first international conference of coral cultivators took place in Burgers’ Zoo in 2008. More than 150 experts from 23 different countries exchanged their knowledge here.
Coral reefs are endangered world-wide by overfishing, tourism, pollution and climate change. Coral reefs are the most important buffer zones of coastal areas and they form the basis of an extensive ecosystem.