Source: nu.nl
A female boa constrictor has produced two litters of babies without being inseminated by a male. The female boa lives with four males, but genetic research showed that the young are not related to the males. 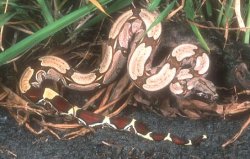 The research was conducted at the North Carolina State University (USA), where the animals are kept.
Parthenogenesis, that is reproduction without fertilization, has been reported previously among hammerhead sharks and komodo dragons. This is also called virgin birth or virginal reproduction. It is remarkable that this particular female lives with four males and that the group does display mating behaviour.
The genetic make up of the young is extra special. The snakes inherited half of the mother’s genes twice. They show a chromosome pair that has not been attested in nature before. Male boas have two Z chromosomes. Female boas have a Z and a W chromosome. The young that were born without fertilization all have two W chromosomes. The young are viable, but it is not yet known whether they can reproduce. They are, by the way, all female.
Complex experiments did produce animals with WW-chromosome pairs before.

The results of this research are published in Proceedings of the Royal Society B.