Source: blijdorp.nl
A recent addition is swimming around in the Oceanium at Diergaarde Blijdorp, the Rotterdam Zoo: a young cownose ray. Although the ray is more than two months old, it has only very recently been on view in the large aquarium. 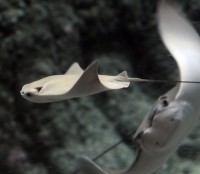 This young specimen is the result of Europe’s first known success in breeding cownose rays.
Two days after its birth, the young ray was moved from the large tank into a smaller tank behind the scenes. Rays do not care for their young; the pups must fend for themselves right away. The small ray (width 33 cm, weight 700 gram) was moved in order to protect it from other fish in the aquarium, and to be able to observe it more closely. The move enabled the staff to monitor its food intake -- it took two weeks for the young ray to eat independently -- and to teach the ray to be fed by hand. All of the rays in the Oceanium are fed by hand to keep other fish from eating their food. Cownose rays are slow, big eaters. Their diet consists of prawns, pieces of clam and sprat. In the wild, they eat mostly bivalve shellfish that they dig out of the sand.

Adult cownose rays can grow to a width of 70 cm and can weigh up to about 10 kg. These rays are viviparous; both the fertilisation and the development of the young take place internally. Usually a sole pup is born after a gestation of about seven months. Unlike many other rays that spend a lot of time on the bottom, the cownose ray spends a great deal of time swimming freely through the water; because of its long fins, it appears to be flying.

Cownose rays can be found in large parts of the Atlantic ocean, on the coast of both Africa and America (from Florida to Brazil). Though the number of wild rays is decreasing, it is not considered an endangered species.