Source: zoovienna.at
Vienna's Tiergarten Schönbrunn is proud to be the first zoo in the world to announce the birth of two batagur turtles. This turtle species is seriously endangered: worldwide, only twenty individuals remain. 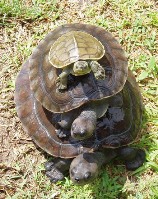 In the last century, the northern batagur turtle (Batagur baska) was common in the rivers of Southeast India, Myanmar and Bangladesh. Because both its meat and its eggs are considered a delicacy, the species has been harvested to near extinction.

In April 2010, Tiergarten Schönbrunn was given four batagur turtles -- including two pregnant females -- by Reiner and Peter Praschag. This father-and-son team of turtle experts has been working untiringly to save turtles “from the cooking pot”. Extensive discussions with the zoo’s animal keepers ensued because of the near-extinct status of these animals. The best conditions had to be created, and the eggs could not be out of sight for even a moment.

The results made it all worthwhile: two young turtles hatched in the summer of 2010. The adult animals can be seen in a large turtle enclosure in the Rainforest House; the young animals are housed in the Aquarium.