Source (text and photo): nationalgeographic.com
In a group of mandrills in the Colcester Zoo, behaviour has been observed that is specific to that group. The behaviour appeared naturally, without human interference, and has already been present for a full generation; this allows it to be defined as cultural behaviour. 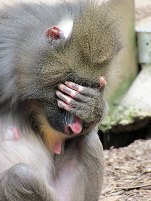 Mandrills (Mandrilllus sphinx) are, after anthropoids, the largest apes. In the Colcester Zoo mandrill group, all 23 animals exhibit the behaviour in question: young and old, males and females alike. They cover their eyes, sometimes for as long as 30 minutes at a time. A biologist from California who studied this behaviour suspects that it started in one individual ape and was then imitated by the other animals in the group; the behaviour’s meaning must also have developed gradually. The researchers are guessing at the exact message conveyed by this behaviour, but they expect that it is a signal meaning, “leave me alone” – comparable to a “do not disturb” sign in the human world.

The researcher has studied nineteen other mandrill groups in North America, Europe and Africa and has not yet encountered this behaviour anywhere else. The gesture is also new to those studying other ape species. Although animals have been seen covering their eyes briefly, this specific behaviour is considered unique.