Source: burgerszoo.eu; photo: Magalhães
In the wild, the Socorro dove has already disappeared. Careful breeding programs in zoos are needed to ensure that this dove species does not disappear altogether. Against this backdrop, the birth of two Socorro doves is good news. 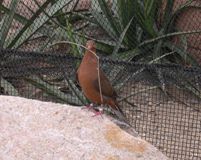 The Socorro dove has its origins on Socorro Island. This island lies 600 kilometres off the coast of northwest Mexico. In 1954, humans began living on the island, as it was turned into a naval base. Before long, hunting by humans and feral cats and overgrazing by imported sheep led to the eradication of the Socorro dove. By 1972 the wild Socorro dove was extinct.

There are an estimated eighty Socorro doves in European zoos, including those in Burgers' Zoo (Arnhem, Netherlands), where there is a successful breeding program: there have already been six hatchings there. The breeding pair is no longer available, as the female has died and the male is now too old to produce progeny. The coordinator of the breeding program arranged for a new pair; the two hatchlings were born of this match.

The Frankfurt zoo coordinates the European breeding program, which has now moved a number of Socorro doves to a new refuge on Socorro. There is a plan for the centre to release the animals into the wild.