Source: llink.nl
For years it has been thought that the earth is home to between 30 and 100 million arthropods, a classification which also includes insects. A new mathematical method calculates that these estimates are too high. 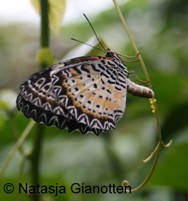 American Entomologist Terry Erwin drafted a formula thirty years ago to calculate the number of different arthropod species. This phylum includes crustaceans, spiders, insects and millipedes, as well as the now-extinct trilobites. Erwin thought that knowing the number of beetles per tree species would make it possible to estimate the worldwide beetle population. Using this method, he calculated the total number of arthropod species at 30 million species; later he even increased this to 100 million species.

Erwin’s estimate has been accepted for thirty years. More recently, however, a new calculation was published in the journal The American Naturalist. A new mathematical model, combined with tallying arthropods in New Guinea, produced an estimate of only 3.7 million arthropod species worldwide.

Probably we will see the use of DNA research to estimate populations in the future.