Source: livescience.com, photo: Bjorn Christian Torrissen
Giraffes, cattle, llamas, camels and various other hoofed animals chew their cud. Now it appears that there are also cud-chewing monkeys. Though every other type of dietary strategy had been seen in primates (humans and hominoids) before, rumination now completes the list. 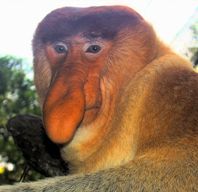 A Japanese research group studying the proboscis monkey (Nasalis larvatus) observed the animals chewing cud. These animals get their name from their enormous nose; male proboscis monkeys are thought to use it to impress females.
Observations and video films revealed that the proboscis monkeys were chewing their food a second time. Animals were seen sucking in their abdomen to bring a bolus back into their mouth to chew again. The researchers suspect that these monkeys can eat more by allowing their food some time in the stomach before chewing it further. Because proboscis monkeys are quite heavy, the fruit and leaves they eat aren’t always of the highest quality: it has to come from branches heavy enough to support the animals’ weight. The juiciest leaves are out of reach. Rumination, it is believed, allows digestive enzymes to work longer to break down the food and make the nutrients available.

It should be noted that the researchers’ conclusions are not undisputed, as the bolus returned to the mouth has never been analysed. This analysis would be quite difficult to achieve, as these monkeys swallow their food quickly when approached.

There are cases of humans and gorillas regurgitating and chewing their food again, but this behaviour has been seen as pathological, whereas rumination in the proboscis monkey is adaptive.