Source: sciencedaily.com
Allowing the ewe to be with her lamb during stressful and/or painful procedures such as ear-tagging can lessen the lamb's pain. Lambs can also be protected by minimising stress for ewes during pregnancy. 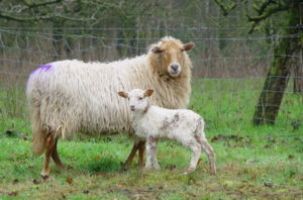 Earlier evidence had already shown that rat and human mothers can mitigate unpleasant experiences in their offspring. New research in Norway has now demonstrated the same effect in sheep. The mother-offspring relationship in sheep is of great importance for the development and well-being of the young. Until now however, not much was known about the effect the presence of the ewe has on her young when the lamb is exposed to negative experiences.

In the first experiment, having the ewe nearby allowed the lamb to be less sensitive to high temperature stimulation. Another experiment showed that the ewe noticed a behavioural change in her lamb when it was in pain, but not when it experienced immune stress or social isolation stress. A final experiment demonstrated that ewes stressed prenatally groomed their lambs more after birth; at one month of age, their lambs were more fearful of humans.

The conclusions drawn at the close of this study are that ewes relieve their lambs’ discomfort and pain, and help their progeny cope with negative experiences. Practical advice can be taken from these conclusions: keep a ewe’s stress to a minimum during pregnancy, and allow her to be close to her lambs when they have to undergo painful procedures.