Source: scientias.nl
Wrasses and parrotfish weave a fine net around their bodies at night. For a long time, it wasn't clear why this was done, but now it turns out that the slimy nets are very effective at keeping parasites away, in much the same way a mosquito net does. 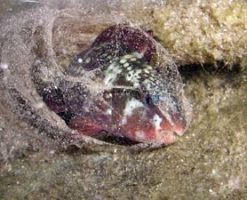 Fish are plagued by biting, blood-sucking parasites. During the day, other fish and shrimp remove them, but avoiding them at night is problematic. Wrasses and parrotfish have developed a way around this problem: two large glands behind the gills secrete mucus in threads that wrap around the body.

These ‘mosquito net’-weaving fish were studied at the University of Queensland. Fish were exposed to parasites. Some fish were covered in parasites by morning; the net-weaving fish slept undisturbed. They sleep in their nets, motionless except for movements of their gill covers. There seems to be a small breathing opening in the nets.

These special fish have plenty of mucus to make their nets. When a fish was disturbed, it made a new net in a second sleeping spot. In captivity, two fish have been observed to share one net. The mucus forming the net is quite soft and transparent, unless sand or salt makes the threads visible. It is not clear how the mucus keeps parasites away; possibly the mucus prevents the parasites from smelling the fish, or it may contain chemicals to repel the parasites.

One thing is certain: the netting is a natural, biodegradable and efficient way to keep parasites away.

This research was published in the Royal Society Biology Letters.