Source: nationalzoo.si.edu
The earth shook at the end of August on the United States’ east coast. The earthquake, measuring 5.8 on the Richter scale, was keenly felt at the Smithsonian National Zoo in Washington, DC. Because it was feeding time, the ... 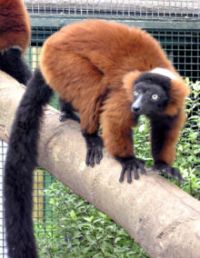 animal keepers were close enough to many animals to see their reactions just before and during the earthquake. The zoo’s website reports extensively on the reactions witnessed. Many animals responded to the earthquake with alarm calls or nervous behaviour. Changes in some animals’ behaviour were observed even before the earthquake began, varying from alarm calls (red ruffed lemurs), to leaving food and climbing into a tree (orang-utan, gorilla) and clustering in a group (flamingos). The flamingos remained huddled together during the quake. One of the gorillas shrieked just before the quake began, grabbed her baby and climbed high into a tree.

During the earthquake, the snakes – normally inactive during the day – were writhing actively. The Komodo dragon sought shelter during the quake. Both the ducks and the beavers were being fed at the quake’s onset; they left their food to enter the water. The cuttlefish interrupted their feeding, when there were suddenly waves in the tank. According to the keepers, the only animals that didn’t react visibly to the earthquake were the giant pandas.

All National Zoo staff, visitors and animals came through the quake unharmed.