Source: nu.nl
What would happen to a giraffe if it found itself in deep water? Would the animal sink like a brick or stay afloat? And if it floated, could it swim or would it drown? Interesting questions that can’t be easily tested, ... 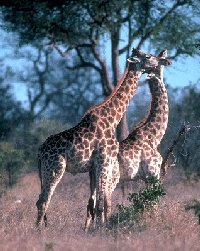 for reasons both practical and ethical. No one has ever seen a giraffe swim, though the animals have been known to wade into a deep river when necessary.

Two researchers, from Canada and the United Kingdom, decided to look into these questions with the aid of computers. A three-dimensional computer model of a giraffe was used to test that species’ ability to float. The model had previously been used to see if other living and extinct animals could float and swim. Calculations took into consideration the density of the giraffe, the shape of the lungs and the effects of water resistance on the limbs. The conclusion was that giraffes might be able to float, but that they would be unstable in the water, too clumsy to be able to move through the water. The giraffe’s body shape would cause the neck to lie nearly horizontal in the water, forcing the head to be held in a very uncomfortable position.

The results of the study were published in Scientific American.

Giraffes are, of course, not very likely to ‘just find themselves in’ deep water. Though these animals can wade into fairly deep water, in the wild it is indeed possible for them to end up in deep rivers and lose their footing.