Source: scientias.nl
Children tend to take the grimace on a dog's face as a smile. This could be the cause of many bite incidents involving young children. But can children interpret a dog's bark? 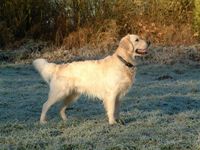 A group of researchers from Hungary studied this question by playing recordings of barking dogs for 6-, 8- and 10-year old children and for adults. The various barks had been recorded while the dogs were alone, when confronted with a stranger and while at play. Research subjects were asked to identify the meaning of the bark: was the dog lonely, angry or happy?

The most surprising result of this experiment was that all subjects, even the youngest children and those growing up without a dog in the house, understood the aggressive bark. The playful bark was recognised by children 10 years and older and by adults. Children 8 years and up recognised the lonely bark.

The researchers concluded that even very young children can learn about dogs by listening closely to them, and they call for teaching children not to look at a dog’s facial expression, but rather to attempt to understand what the dog is trying to say.

The study was published in Applied Animal Behavior Science.