Source: artis.nl, reptilepark.com.au
This somewhat curious name belongs to a lizard species, one of the largest from the slow worm family. This creature, also known as the European glass lizard, can grow to about 140 cm in length. 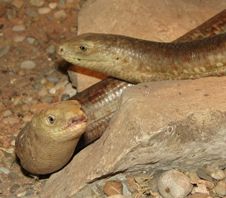 The slow worm and the scheltopusik (Pseudopus apodus) are the only two species from the slow worm family found in Europe in the wild. Because of the scheltopusik’s length and lack of true legs, it is often mistaken for a snake. This animal is, however, a genuine lizard. It can, for instance, shed a piece of its tail when threatened – a phenomenon known as caudal autotomy. The tail does grow back, though often shorter and of a different colour. Other characteristics distinguising the scheltopusik from a snake are its eye lids and ear holes. As well, the scheltopusik can be recognised by the long groove down each side of its body. Near the cloaca, two small wart-like stubs are visible: vestigial legs.

The scheltopusik can be found in Southeast Europe and Central Asia. Its habitat is warm and dry and offers sufficient protection in the form of scrub, walls or rocks in which the animals can shelter in the heat of the day. At twilight, the lizard hunts insects, spiders, snails and slugs, eggs and small rodents.

Roughly 10 weeks after mating, the female lays approximately 8 eggs and then hides and guards them. The eggs hatch after about 50 days. The young are then roughly 15 cm long. In the wild, scheltopusiks can live to be about 20 years old, but in captivity they have been known to reach the grand age of 50 years.

In Artis (Netherlands), scheltopusiks have now hatched for the first time in nine years. And the name? It comes from Russian and means ‘yellow belly’.