Source: scientias. nl
Meerkats recognise each other, among other means, by their voices: evidence that we humans aren't so special after all. This is the conclusion of researchers from Switzerland who conducted experiments with meerkats and published results in Biology Letters. 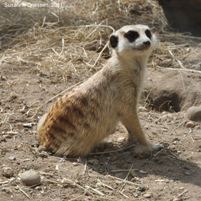 The recognition of individuals is considered to be very important in the development of social animal groups. Most of the research in this field has involved primates, but scientists from the University of Zürich experimented with speakers hidden in the bush near meerkats (Suricata suricatta). Meerkat voices could be heard through the speakers in various patterns: voices of different animals one after the other, or the voice of one animal from one speaker and then again a second later from the speaker on the other side of the field. The meerkats spent much more time attending to the same call heard first on one side and soon on the other: it sounded unusual, comparable to hearing a person’s voice from the attic and then hearing that same voice from the kitchen. But it can only seem unusual to the animal if the voice can be associated with one single individual. Hearing voices not identified as belonging to only one individual coming from different places in rapid succession is no problem at all and so requires no extra attention.

This seems to demonstrate that meerkats recognise individuals’ voices. The possibility that many more animal species have this same ability, and the fact that this has not yet been explored, led the researchers to believe that humans’ (anthropoids’) ability to recognise voices might not be so special after all.