Source: burgerszoo.eu, photo by Sebastian Wallroth
A young monk vulture from Burgers' Zoo in Arnhem has been shipped off to the southwest of France, where French biologists will release the bird into the wild in the Verdon region - but this is not a first. 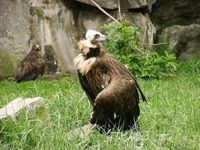 Burgers’ Zoo has collaborated with the French nature conservation organisation LPO PACA Antenne Verdon since the start of the reintroduction project in 2005. During the first year, the young monk vulture ‘Arnhem’, born at the zoo, was successfully released. The vulture has been sighted regularly in the Verdon, and has adjusted well to its life in the wild.

The monk vulture ‘Burgers’ Zoo’ hatched at the end of May 2011 in Arnhem. Its sex is as yet unknown, not yet determined by DNA test. The bird was crated and taken south to be released together with a monk vulture born in France.

Before being released, a number of the vultures’ feathers are bleached to allow the birds to be recognised easily in the first weeks. A transmitter is also attached to the tail feathers.

The circumstances for the vultures in their mountainous habitat in the Verdon have improved in the last number of years. The local population has been better educated about the birds. Livestock corpses are now put out for the vultures, and there have been fewer poisonings by farmers. The French government works closely with the European zoo monk vulture breeding programme.