Bron: news.bbc.co.uk
The white feathers of the snowy owl reflect the sunlight, announcing the presence of the bird to its rivals. Ten years of studying the snowy owl has yielded much information for researchers from Canada and Spain. 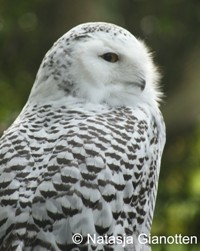 The snowy owl (Bubo scandiacus) is not always pure white, despite its name. The birds vary from brown to white, depending on age and sex. Adult animals are usually completely white. The owl’s face, throat and breast are usually the lightest colour, without spots. The researchers suspect that this part of the body is used the most for sending signals. The colour white lends itself well for signalling, as it is a good reflector of light and is visible from far away. The researchers discovered that the owls rotate with the sun, changing the position of their body as the sun moves across the sky. Another discovery was that the colour of the feathers was correlated with the animal’s location. Owls with brown spots tended to choose higher resting places, such as a high pole. Completely white owls were more often seen on the ground, where the snow helps out by reflecting off of their white feathers.

In order to maximise reflection of the sun on their white feathers, the owls have to look into the sun. This would be very painful for humans, but for owls it’s no problem. Their eyelashes consist of small hairs and adapted feathers which prevent troublesome glare.

The study appeared in the International Journal of Avian Science.