Source: nationalgeographic.com, photo: Mariluna
High levels of fatty acids in the blood of pythons increase the size of their heart and other organs after a copious meal. The enlarged organs enable the animals to process an enormous meal in a short time. 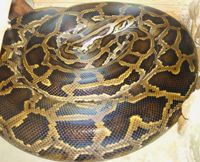 Pythons are irregular eaters. Periods of fasting (sometimes months long) are alternated with large meals. After a generous meal the organs of the snake, including the heart, increase in size as much as 40 per cent.

These effects were studied at the University of Colorado (USA). The investigation began in 2005 with twenty baby Burmese pythons: as researchers noted, not exactly a standard laboratory animal. Because all organs except for the brain became enlarged, it was soon thought that the substance responsible for the effects must be in the blood. Python blood samples taken after a large meal were of a milky colour, which turned out to be caused by the high fatty acid content. Samples of this python blood added to cell cultures also resulted in cell growth.

Various elimination tests resulted in identifying the fatty acids as the substance responsible for the organ growth. It is actually amazing that the pythons don’t get sick from the extremely high levels of fatty acid in the blood. First it was thought – though this has now been disproven – that a specific combination of three fatty acids was responsible for the organ growth, as a mix of these three, when injected into a live mouse, caused that animal’s heart to grow.

It has not yet been explained just how the fatty acids cause the organs to increase in size. Nor is it clear why high levels of fats in the blood don’t cause cardiovascular disease in pythons.
Photo license: Creative Commons Attribution-Share Alike 3.0