The 'why' of zebra stripes

Source: nationalgeographic.com
Why does a zebra have a black-and-white pattern of stripes? This could have to do with camouflage, as the stripes make it more difficult for colour-blind lions to see them in tall grass. 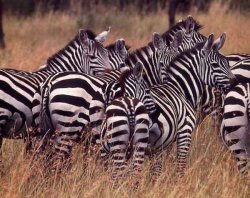 In addition, an individual zebra is difficult to make out in a whole group of black-and-white striped animals. But researchers in Hungary have found another possible reason: these stripes are not attractive to horseflies.

Female horseflies feed on blood. These horseflies are attracted by polarised light: light waves oriented in a specific direction. In an earlier study it was discovered that a darker coat reflects light better than a lighter coat, as horseflies were observed to be more plentiful on dark-coloured horses than on light-coloured ones. The researchers in this study hypothesized that the attractiveness of the black-and-white zebras would fall somewhere between these two extremes. The test involved white, black and striped boards and model horses. To their surprise, the researchers discovered that the stripes were the least attractive to horseflies, and that the smaller the stripes, the less flies they attracted. The assumption is that the stripes ‘confuse’ the polarised light pattern.

The conclusion drawn after this study is that the zebra’s striped pattern developed as an evolutionary adaptation because it was the best at repelling horseflies. That could also be the reason that the stripes on the legs and the head of the zebra are the narrowest: this is where the skin is the thinnest.

The conclusions of study are not beyond question. The tests were carried out with boards and model animals, ignoring the effects of the temperature and scent of live zebras. And why would horses, close relatives of zebras, not have developed stripes? The researchers believe that these patterns might have been bred out of the horses because they were not deemed attractive.