Source: rotterdamzoo.nl, rijnmond.nl, photo: Cacophony
Friday the 13th was no unlucky day in Diergaarde Blijdorp: that day saw three marabou stork chicks emerge from their eggs. A first for this Rotterdam zoo. And there are four more eggs divided among two other nests. 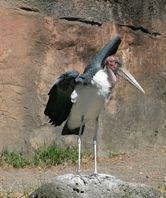 The young birds remain behind the scenes so their parents can care for them in peace, taking turns keeping the young warm and fed. Visitors can watch the marabous, registered by webcam, on a monitor in the educational part of the animal clinic. When the parents switch places, observers get the chance to see the young. One of the three, unfortunately, has not survived; according to the animal keeper, this is often the case. The other two now have better odds of survival.

Marabous are also known as exotic storks. They occur naturally in Africa, where they live on the savannahs and eat both fresh meat and carrion. They aren’t the most attractive birds, with their bald heads, scrubby head feathers, hanging throat sac and yellowish bills, but they are among the largest birds in the world. Their wingspan of 2.60 metres allows them to share the title of ‘largest flying bird’ with the Andes condor of South America.

In the Rotterdam zoo, the marabous have been housed for the past two years in a very large, naturally landscaped aviary which is home to eight marabous: two that had come from elsewhere in the zoo, and six from a Spanish zoo. Also sharing the aviary are vultures and other African bird species. In the winter the marabous are moved to an indoor enclosure, while the vultures remain outside.
Photo license: Creative Commons Attribution-Share Alike 3.0