Source: rotterdamzoo.nl and waza.org
The Philippine spotted deer is an endangered species found in the wild on two of the Philippine islands, Negros and Panay. In zoos these animals are involved in rearing programmes linked to conservation programmes in the Philippines. 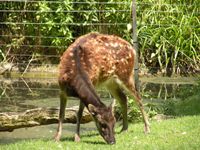 The Philippine spotted deer (Cervus alfredi) is one of the smaller species of deer, with a length of approximately 130 cm and a shoulder height of 60-80 cm. Adults weigh 40-60 kg. Its build is squat, with fairly short legs and a short tail. The deer’s brown fur is soft and dense and features lighter spots on the flanks. The underparts are lighter-coloured; the chin sports white fur and there are light rings around the eyes. Only the males have antlers. The Philippine spotted deer was first recognised as a separate species in 1983; previously it was considered a subspecies of the sambar. Its natural habitat is the forest, where it prefers open areas with young plants.

In zoos, Philippine spotted deer are kept in small groups consisting of a male, a few females and their young. There must be ample space in the enclosure with possibilities for the animals to hide from others. Other necessary elements are the opportunity to take mud-baths and the presence of branches so that the animals can wipe their antlers clean. Zoo feed consists of grass, twigs, leaves, hay, browser pellets, grains, fruits and vegetables.

In the Netherlands, this species can be seen only in Diergaarde Blijdorp, the Rotterdam zoo. There have been two breeding pairs there since 1999, and they have produced dozens of young in recent years. These offspring have been relocated to various zoos in other countries.