source: medicalfacts.nl
Among sport horses, chronic inflammatory small bowel disease (ISBD) is on the increase. Dressage horses appear to be especially susceptible. This disease is associated with recurring colic, anaemia, weight loss and poor performance, and could be ... 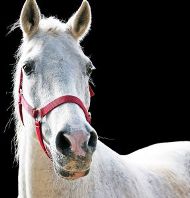 related to gluten in the horses’ feed and the antibodies the animals make in response to the gluten. These effects have been studied by researchers at the University of Utrecht Faculty of Veterinary Medicine and celiac disease specialists at the VU University Medical Center Amsterdam (both in the Netherlands).

Gluten is present in a variety of grains, including wheat – the use of which is increasing in concentrated horse feeds. According to the study, horses receiving gluten in their feed can react to this substance with antibodies in the blood, and the gluten causes damage to the intestinal villi. This mechanism is comparable to that in humans with celiac disease. One sport horse in the study with chronic small intestine inflammation was shown to have high levels of these antibodies. After six months on a gluten-free diet, antibody levels had decreased and improvement were seen in the intestinal villi. A blood test is being developed to screen individual horses for gluten sensitivity.

This discovery, that gluten may be responsible for similar diseases in horses and humans, is a surprising one for the celiac specialists. Research comparing horses and humans with gluten intolerance could yield useful information.

This research was described in the article ‘Gluten-dependent antibodies in horses with inflammatory small bowel disease (ISBD)’ published on the website of Veterinary Quarterly.