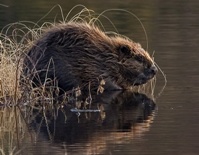 In ten areas of Europe in coming years (before 2020), one million hectares of farmland will be turned into wilderness. The areas are to be financed through tourist income. In the last fifteen years alone, twelve million hectares of European agricultural land has fallen into disuse, mostly because large-scale cultivation on the land was no longer possible. It is expected that this will be the case with another eighteen million hectares before 2030. These large areas then have no economic function and are – and will remain – sparsely populated.

On the other hand, populations of various animal species are increasing due to specific conservation measures, reduced insecticide use and the linking of conservation areas. Among these animals are the wolf, the brown bear and the beaver. Rewilding Europe wants to allow these – large – mammals to lead a natural life in wilderness areas of at least 100,000 hectares. Humans are not to manage these populations; their sizes are to be determined by food supply and weather conditions. The presence of large numbers of predators and grazers will make these areas attractive for safaris and, at the perimeter, for lodging. The wilderness areas must be able to exist without subsidies; only limited start-up subsidies are possible for beginning entrepreneurs. Comparable programmes have been very successful in southern Africa.