Source: nationalgeographic.com
In the Netherlands, ecoducts are a familiar sight, arching over highways to provide a safe connecting path for animals. Tunnels are also common there, to offer smaller species a safe route. Kenya now has a special feature to help animals, one not seen in the Netherlands: an elephant underpass. 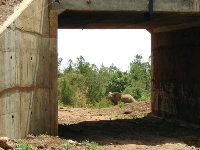 Under the busy road between Nanyuki and Meru, in northern Kenya, the first underpass has been built to offer elephants and other large mammals safe passage from one conservation area to the other. Elephant populations are separated by highways, fences and farmland. The animals’ attempts to move from one isolated area to another increasingly lead to conflicts with the population, and to damage to fences and other property.

The underpass was built in late 2010 and is a huge success. Hundreds of elephants have been spotted making use of the corridor. The chief conservation officer of the local wildlife organisation said that seeing the first pictures of elephants walking through the underpass was “an awesome moment”.