Source: nationalgeographic.com
Father's Day is over now, and so is the special attention paid to human fathers. But what is the role of fathers in the animal world? In many species, care for the young is the mother's job, or the young must look out for themselves directly after their birth. 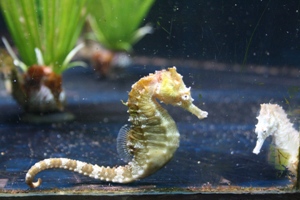 And yet certain animals are cared for by their fathers, even before birth. The male emperor penguin keeps the egg, and the penguin chick inside it, warm under a flap of skin. The giant water bug female glues her eggs to the male’s back, who then cares for and protects them. Seahorse fathers go even further: the eggs are laid in a special pouch, making the male look pregnant. Still other animal fathers help with the birth of young, and, like common marmosets, carry and protect their young. Difficult pregnancy and birth –as in the common marmoset, whose young are nearly a quarter of the mother’s weight by the end of the pregnancy – might be a factor in the father taking on a larger caring role. In some bird species as well, including the swan (shared parenting) and rhea, the father provides most of the care for the young. Sandgrouse males have a special way of caring for their young: chicks drink from their father’s breast feathers after he has dipped them in water.

These examples – and more – of caring animal fathers can be found on the National Geographic website.