Source: dutchcelldogs.nl and groenkennisnet.nl/dierenwelzijnsweb
The focus of one of the presentations at the symposium 'Caring Properly for Care Animals' was the Dutch Cell Dogs project, which helps detainees train dogs from shelters to improve the chances that these animals will find a new home. 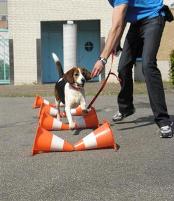 Dutch Cell Dogs is under the direction of Marlies de Bats, veterinary technician and behavioural therapist, and Betty Buijtels, canine behaviour instructor and behavioural therapist. Detainees and shelter dogs – the match for each pair is essential – train under the guidance of these two professionals. The training, using a clicker, is based on positive reinforcement: good behaviour is rewarded, undesirable behaviour is ignored. The dog-detainee combinations are formed on the basis of interviews and questionnaires. The training lasts eight weeks, during which the detainee is responsible for the dog. Dutch Cell Dogs remains responsible for the dog’s welfare, and can pull the dog from the programme if necessary. If a detainee doesn’t show up for training session, he or she is removed from the training.

The symposium presenter reported significantly improved well-being for the dogs enrolled in this programme. The animals exhibit less fearful behaviours, more obedience and a decrease in behavioural problems and stereotypical behaviour. The approach is positive for both the shelter dog and the detainee: a win-win project.

On the Dutch Cell Dogs website are photos of animals that have been placed in new homes after the project, and fragments of training journals kept by detainees. Interest in the project is now emerging beyond the Dutch borders.