Source: Dierennieuws/NVD
The Dutch Society of Zoos (NVD) has raised awareness of the turtle crisis with the Shellshock Campaign. With help of the visitors, zoos have collected a rough 40.000 euros. This money will be used to protect turtles in the wild. 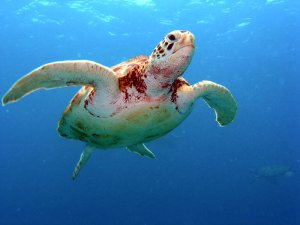 Wild turtles suffer worldwide from the destruction and fragmentation of their habitat.
In China and the Southeast of Asia turtles are being traded massively for human consumption, the production of medicines, or simply as pets. Many turtle populations also suffer from unnatural predators, plundering of the nests, and pollution.

Because of this, a large number of the 272 turtle species is on the bring of extinction. The campaign of the NVD zoos was therefore meant to raise awareness of this crisis. The Shellshock Campaign sprang from a European campaign, started by the EAZA (European Association of Zoos and Aquaria). The collected money will be used for 14 different projects that seek to protect turtles in their own environment, for example the project that protects the nesting beaches of the endangered Mangrove turtle alongside the Sre Ambel river in Cambodia.
The campaign started successfully on April 13 of this year with the births of the highly endangered Fly River Turtle, followed, among others, by the rare Roti Snake-necked Turtle.