Source: diergaardeblijdorp.nl
Thirteen ploughshare tortoises confiscated in Asia have been divided among three European zoos, and will be used to establish a European breeding programme. One of these zoos is Diergaarde Blijdorp in Rotterdam.. 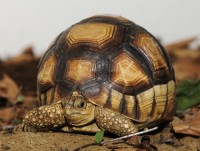 Four ploughshare tortoises have ended up at Blijdorp; the others are being kept in the UK, at Durrell Wildlife Conservation Trust in Jersey and at Chester Zoo. The tortoises had been confiscated in Asia and brought via Hong Kong to Europe, and then to the three zoos. The ploughshare tortoise is native to Northern Madagascar and is critically endangered. Estimates indicate that there are only approximately 200 of these animals left in the wild. These tortoises are traded on the black market as household pets, made popular because they are so rare.