Source text and photo: avifauna.nl
During a burglary in 2009, songbirds were stolen from the Netherlands' Avifauna Bird Park. Enormous media coverage of the theft facilitated the return of the birds within one week. Among the stolen birds was a pair of the very rare Montserrat orioles. The park now reports the first hatching of this species since then. 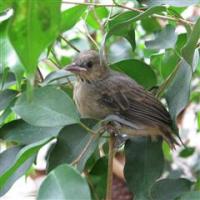 The burglary in 2009 received national press coverage, including a report on the eight o’clock news. This led to the speedy return of the stolen birds to their rightful owner: a buyer saw on the news that his new acquisitions had been stolen, so he brought them back to the Bird Park.

The Montserrat oriole is threatened with extinction. In the wild, there are less than 500 of these animals left. Zoos throughout Europe are doing their best to keep this species from disappearing by breeding a back-up population. Avifauna participates in this effort. They have had a breeding pair since 2009, but the brooding season that year was disturbed by the break-in. Now there is finally a hatchling. At this point, there are approximately 70 Montserrat orioles in various zoos around the world, but as this is not sufficient to protect the birds from extinction, Avifauna is very pleased with the hatching. The birds remain a possession of the government authorities of Montserrat – a British overseas territory in the Caribbean – and may be re-released on the island in the future.