Source: levendehave.nl
The municipality of Almere (Netherlands) is making use of Mangalitsa pigs in the battle against the giant hogweed. Earlier trials using sheep to rid Almere's Kromsloot Park of the hogweed were unsuccessful. All hope is now focused on the Hungarian pigs. 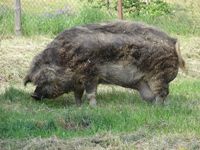 Executive councillor Ed Anker says the current trial will last three months. These pigs have never been used for an experiment like this in the Netherlands, but similar trials in Eastern Europe have been successful. Giant hogweed (Heracleum mantegazzianum) contains substances which can trigger severe reactions in humans: the sap can cause swelling and blistering. The Mangalitsa pig is insensitive to these substances. These pigs are expected to exterminate the giant hogweed altogether. A forest parcel has been fenced off and four pigs have been introduced there. Mangalitsa pigs are also known as Hungarian curly-hair hogs. They are not bothered by cold, and are very active. The animals are easy to keep as free-range pigs. These pigs are known to be ‘living ploughs’. There is a big chance that the parcel of land not only becomes free of the giant hogweed, but also gets thoroughly ploughed under. If this is the case, new plants will establish themselves there.