Source: zooantwerpen.be
The Antwerp zoo now has an enclosure set up to be shared by lions and yellow mongooses. What makes this interesting is that the lion, of course, is a predator, and the yellow mongoose is prey. 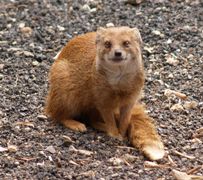 The first step in the project was to allow the small mammals to explore the lion enclosure, and last week they were allowed into the large area together with the lions. Although the mongooses know the underground network of tunnels, and the forty entrances, like the back of their hand, sharing space with the lions remains suspenseful. The introduction was carefully orchestrated: the lions had just been fed when the head of a mongoose popped above ground. Lioness Caitlin noticed right away. As soon as she caught a glimpse of the mongoose, she sprinted towards it. After a while, during which the mongooses were faster than Caitlin every time, the big female cat gave up and lay down. Victor, the male lion, didn’t intervene, he just watched his daughter from a distance.

Combining these two species in one enclosure should stimulate the animals’ natural behaviour. The lions’ hunting instinct is triggered; the mongooses become more alert, having to take the lions into account when searching for food. The mongooses always have the choice to venture into the large lion enclosure, escape through the tunnels, or stay in their own enclosure. Animal keepers hope that these animals adjust to this new situation. At first, the mongooses were allowed to be with the lions for half a day. The animals’ reactions guide the decisions to extend exposure periods. The first introduction went well, but after several days the pounce of the lioness was too fast for a mongoose that had underestimated the lion and overestimated itself. The introduction scheme has now been adapted.