White-headed marmosets in the Primate House

Source: artis.nl
A year and a half ago, during the summer of 2011, the Primate House at Artis Zoo (Amsterdam) was reopened to the public after a major renovation. The Primate House is home to more than twenty different animal species and is designed as a tropical forest. 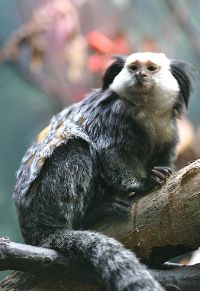 More than 300 plant and tree species make up this indoor forest. Animals species the public can view include pygmy marmosets, treeshrews, pottos, Seba’s short-tailed bats, iguanas, Bali mynas, turtles, Waldrapp ibis, one sloth and alpine marmots. Visitors walk through the middle of the Primate House in which the animals can move about freely. One of the species represented, the white-headed marmoset, is the first mammal species to produce offspring there. The two young marmosets are carried on their father’s back and brought to their mother only when they need to be nursed; as soon as they are finished, the father takes them onto his back again. This routine lasts five or six months.
The white-headed marmoset lives in the wild in southeast Brazil. The animals are completely adapted to life in the trees. They eat fruit, small vertebrates and invertebrates, and gum, resin and sap. These latter products can be found on tree trunks, and become available when the bark is damaged. The damage is caused by the marmosets themselves (by gnawing on the bark) or by insects. The fact that the white-headed marmosets can also eat gum allows them to survive even when food is scarce.