Source: nationalgeographic.com
Bowerbirds are known for the extraordinary constructions they build to attract mates. Most bowerbird males decorate their bowers with brightly coloured and/or shiny objects; the great bowerbird, however, has its own method. 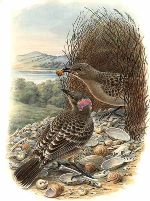 The bower of the great bowerbird (Ptilonorhynchus nuchalis) might seem lacklustre compared to that of its nearest kin: just a lane of sticks leading to a few courts, embellished with mostly grey and white objects such as pebbles, shells and bones. But the design is not as simple as it appears. The objects are arranged carefully, and the bird makes use of perspective. Larger objects are placed farthest away from the bower avenue, suggesting the illusion of an evenly-textured stage. During courtship, the female stands in the opening to the avenue and the male on his stage, where he waves to the female with coloured objects. The forced perspective can be attractive to the female, or make the male easier to see. Either way, males with the most geometric patterns are the most successful with females.

This way of decorating was discovered by two biologists from an Australian university. They also discovered that male great bowerbirds are absolutely convinced of their own talents. When the biologists changed an arrangement to make it even more geometric, the bowerbird changed it back to its own design within three days.