Source: scientias.nl
Many people enjoy puzzles. They require no prize; working toward a solution is a reward in itself - and this appears to be true for chimpanzees as well. In a British zoo, researchers provided a puzzle for chimpanzees. 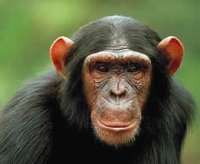 Through a maze of tubes, and with the help of fingers or thin sticks, a small cube could be moved along so that it would ultimately fall into an ‘exit’ tray. Sometimes, the cube was replaced with a nut which could be eaten after it had gone through the entire tube system. The investigators discovered that it didn’t matter whether they used a nut or a cube: even without the edible reward, the chimpanzees finished the puzzle. To the researchers, this suggests that solving the puzzle gave the chimpanzees a sense of satisfaction.

The chimps were not taught how to solve the puzzle; they had to figure it out themselves. The puzzle was simply placed within their reach, and they could do with it whatever they liked. In the study, solving the puzzle was likened to how wild chimpanzees poke their fingers or twigs into small openings to search for insects or honey. The puzzle was, say the investigators, even more of a challenge, because the cube did not stick to the twig as honey or an insect would.

How the chimpanzees enjoyed this challenge is described in the American Journal of Primatology.