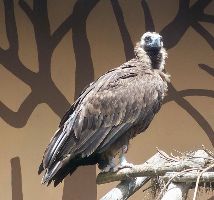 Planckendael is the coordination headquarters for the European breeding program for the cinereous vulture, and is also the keeper of the genealogy registers for this “monk vulture”, the largest raptor in Europe. Birds from various zoos are brought together in a special dating aviary. In addition, cinereous vultures are released into the wild in the southern French region known as Provence-Alpes-Côte d’Azur. Jean was born in the spring of 2008 in Planckendael and was released in the summer of that year in the south of France. A band with extra-large letters and a number of coloured feathers made Jean recognisable. He was first seen in 2011 with a female bearing no band. In February this year, researchers saw Jean sitting on a nest – the males and females take turns – and in April, their young was spotted. Meanwhile, the young has been banded, and some of its feathers were taken to allow sexing. The young bird is expected to leave its nest soon.

In ZOO Antwerp, Belgium, as well, a cinereous vulture hatched this year. The animal will move to Planckendael in September to grow up in the dating aviary. One hopes that he finds a mate there, too.
Photo license: Creative Commons Attribution-Share Alike 3.0