Source: gla.ac.uk
Giant pandas don't easily reproduce in captivity, and sometimes a mother panda will reject her young. In the case of twins, the mother can also feed one baby but not the other. 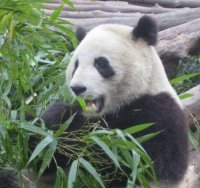 Zoo caretakers then try to take over for the mother to save the tiny animals, feeding them cow’s milk that has been modified for puppies. In the event of twins, an effort is made to put the young pandas, one at a time, with the mother. Especially the first milk, the colostrum, is essential for the young pandas. Scientists from China and from University of Glasgow are now collaborating to develop a better artificial milk for baby pandas.

State-of-the-art machinery is being used to characterise the proteins and other molecules in the milk. One challenge is that the milk’s composition changes. Colostrum is not the same as milk produced later. Unique to pandas and other bear species is the enormous development of the young. Bear cubs are very small and underdeveloped. The mothers are at least one thousand times smaller than the baby. And the milk contributes to the healthy development of the young. The composition of the milk keeps changing: some molecules are abundant at first and later absent, or the other way round. Other molecules are present in constant quantities. The researchers say that they are still a long ways away from the perfect artificial milk, but that the data found so far points in the right direction.