Source: burgerszoo.nl
After its most recent gorilla birth, at the end of November, Burgers' Zoo became home to the largest troop of western lowland gorillas in the Netherlands. In 2013 this zoo saw the birth of 5 baby gorillas: a first in the history of Burgers' Zoo. 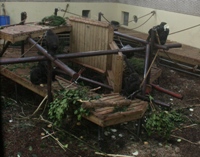 The composition of this gorilla troop is as in the wild. Bauwi, the silverback, is its true leader. His harem is made up of three experienced females and three younger females. Then came an adolescent, 12-year-old male that has now been moved to a different zoo. The others in the troop are still dependent on their mothers: two four-year-olds and the babies born this year.
Nukta, a male, is nine months old. The twins N’Hasa (male) and N’Kato (female) are now seven months old. And then there is a three month old male baby and, since the end of November, another baby. Makoua’s baby, the three-month-old, will be receiving a nice African name. The youngest gorilla was first-born to a fairly young mother, N’Aika. Because things can go wrong when a gorilla mother lacks experience, the keepers have kept an eye on the little one and have provided as much rest as the mother and her baby need. Fortunately, N’Aika seems to be doing right by her baby, nursing it at regular intervals and mothering well.