Source: vroegevogels.vara.nl, photo by Mnolf
With the help of tape and glue, an eggshell was repaired and remained whole long enough to hatch a healthy young kakapo, also known as an owl parrot. The kakapo is a very rare species of parrot native to New Zealand. 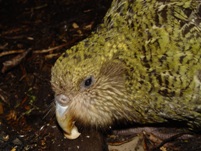 These birds cannot fly, and are found on a few small islands where there are no predators. They can live quite long, reaching an average of 90 years old. These herbivores are primarily active at dusk and at night. When near extinction in the 1980s, the last group of approximately 200 birds was moved to five islands devoid of predators. In their new habitat, the birds are well protected and closely observed.

On one of these islands, a ranger encountered an egg that was close to hatching, but had cracked. She repaired the shell and placed the egg in an incubator. A number of days later, a healthy chick emerged from the egg. Though its sex is not yet known, it was named Lisa One.
Photo license: Creative Commons Attribution-Share Alike 3.0