Source: K. Leus, Royal Zoological Society of Antwerp, Belgium.
This paper reviews the available information on stomach anatomy, digestion, foraging behaviour and diet of wild and captive babirusa, in order to formulate a recommended diet for babirusa in zoological gardens. 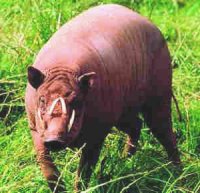 Although unilocular, the babirusa stomach contains an enlarged area of mucus-producing cardiac glands (>70% of internal surface area v. 30% in Sus scrofa) with a near-neutral pH and populations of microorganisms. The true gastric glands are confined to a small gastric unit. Results from two independent digestibility studies on captive babirusa were in concordance with the general characteristics of non-ruminant forestomach fermenting frugivore/concentrate selectors specialised in the fermentation of more easily digestible plant components. Passage time experiments suggested that no part of the digestive tract selectively held digesta longer than any other part and that caecocolic fermentation may be less important in the babirusa than in the Eurasian wild pig. Behavioural observations on wild and captive babirusa indicated that they usually practise surface foraging, that rooting only takes place in loose soil, that they stand on their hind legs to reach food in higher places and that males tend to monopolise food when animals are fed together. Published information as well as a recent field study suggest that wild babirusa show a marked preference for fruit and also consume a fair amount of animal material as well as mineral-rich soil and water. Analyses of the dietary habits of babirusa in 25 zoos worldwide revealed food preferences similar to those of wild animals. However, calculation of the nutritional composition of the captive diets revealed a spread in values so large that it is impossible for all of these diets to answer to the nutritional requirements of the species. Using the above information, adapted prediction equations and the animal nutritionist program a recommended diet for babirusa in captivity will be formulated.